Wayne Gerhold was invited to be a Squirrel Hill Urban Coalition (SHUC) Board member and to Chair the Land Use Committee in 1978 by the then Board President, Mickey Kaufman.  He served in that capacity until 1980 when he moved to Harrisburg to be the Executive Director of the State Public School Building Authority and the Pennsylvania Higher Education Facilities Authority.  He later was appointed Executive Director of the Pennsylvania Housing Finance Agency.  Upon is return to Pittsburgh on 1985, he again joined the Board of Directors of the Squirrel Hill Urban Coalition and continued to serve on the Board and was the Chair of the Education Committee until 2012.  During those years Wayne served as First Vice President for two years, President for two years and was Treasurer until 2012.  He also served as a member of the Nine Mile Run Task Force Committee.

Steve Hawkins has been a Squirrel Hill resident since college graduation in 1973.  Starting his own architectural firm in 1985 and which was always located in Squirrel Hill.  Steve joined the SHUC board in 1986.  The Hawkin’s raised three daughters in their starter home on Kamin Street, where they have lived for 41 years.

Erik founded the Commercial Division of Howard Hanna Company and has been a landlord in both Pennsylvania and Florida.

He has been involved with SHUC since the mid 70’s when it was meeting in a storefront on Murray Ave. and Richard Cohen was Executive Director.  He has chaired the Zoning and Land Use Committee and was the Co-Chairman of the As Built Committee.

Marian Lien became the executive director of the Squirrel Hill Urban Coalition in October of 2014. For over 20 years, her interests and desires to create a more socially just society led her down a professional path of creating safer environments for patients in rural health care; teaching diversity and equity in higher-ed; and building a more sustainable community. She holds a Master’s degree in Public Policy Management from the University of Pittsburgh’s Graduate School of Public and International Affairs. Marian currently serves on the Greater Pittsburgh’s YMCA Committee for Diversity, Inclusion and Global Centers of Excellence (DIG); is a commissioner on the Governor’s Advisory Commission on Asian and Pacific American Affairs in Pennsylvania and on the City of Pittsburgh’s Commission for Human Relations; and is on the mayor’s Steering Committee for Welcoming Pittsburgh. She is also on the board of Pittsburgh Community Reinvestment Group and OCA Advocates for Asian and Pacific Americans, Pittsburgh Chapter.

Yale Rosenstein was born in Pittsburgh and has lived in Squirrel Hill for 80 years.  He went to Colfax and Taylor Allderdice as did his children.  His father owned and operated the Squirrel Hill News Stand until 1955.  Yale graduated the University of Pittsburgh with a Bachelor in Economics and after serving in the US Air Force Strategic Air Command, worked as a Certified Financial Planner for many years. Yale has volunteered with many community organizations including SHUC.

Karen Brean is an architect and urban planner with over thirty years of professional experience.  She has successfully managed long-term public involvement processes with multiple stakeholder groups and agendas, working with public agencies and institutions.

Recent work has included collaboration on the City of Pittsburgh’s Vacant Land Toolkit (with Asakura Robinson), the Urban Redevelopment’s East Liberty/Larimer Park Planning and Design project (with Wallace Roberts Todd), the South Side Park Master Plan (with Studio Bryan Hanes), and the Allegheny County Consolidated Plan and Annual Updates (with Mullin and Lonergan).

Brean Associates was founded in 1996. Prior to founding Brean Associates, Karen worked as an intern and staff architect at Deeter Ritchey Sippel, was employed as an Urban Designer on the staff of Pittsburgh’s Department of City Planning, served as the Executive Director of the Squirrel Hill Urban Coalition (1990-1993), and taught Urban Design Studio at Carnegie Mellon University.

Stanley Lederman serves as the Chairman of the City of Pittsburgh Stadium Authority.

He is a life-long resident of Pittsburgh. He graduated from Taylor Allderdice High School and subsequently received both a B.A. and Law Degree from the University of Pittsburgh.

Stanley has been married to Lynette for 46 years.  They have two children and two grandchildren, with a granddaughter on the way.

Stanley was a coach and commissioner in the Squirrel Hill Little League from 1974 – 1988. He now plays in the Roy Hobbs Senior Men’s National Baseball League.  He was past recipient of the Ziggy Kahn Memorial Award from the Jewish Sports Hall of Fame of Western Pennsylvania.

As part of the SHUC 45th anniversary celebration, President Richard Feder wrote about the neighborhood for the Squirrel Hill Magazine.

Following are Richard’s comments:
The Jewish Federation of Greater Pittsburgh recently released a “Jewish Community Survey and Study.  Because the report presents a number of findings about Squirrel Hill’s importance to our Jewish community, and the Jewish population’s importance to Squirrel Hill, I want to share some aspects with you in this edition of the President’s Letter.

Overall, the study estimated that there are 49,200 Jewish persons living in the greater Pittsburgh area, an increase of 17% from the previous time the tabulation was made. According to the study, Squirrel Hill plus Shadyside (actually zip codes 15217+15232) is home to 26% of the region’s Jewish households (containing 30% of the Jewish population). Another 31% of Jewish households are located in the City of Pittsburgh but outside the two neighborhoods. (Squirrel Hill and Shadyside are not broken out separately in the report.)

“The study reveals that Squirrel Hill remains a very vibrant, stable and desirable neighborhood for the community,” said Jack Ukeles of the firm that conducted the study. “The greater Squirrel Hill section of Pittsburgh accounts for 47 percent of the entire Jewish population in greater Pittsburgh. This is a stable, third-generation community that is tightly knit and connected. The stability of Squirrel Hill, a geographic hub of the Jewish community located within the city limits, is unique in North America.”

I noticed that the focus of the 47% statistic is “the Jewish population.” What I wanted to do was turn the focus to Squirrel Hill, i.e., to see if I could determine the percentage of the 27,220 population of the Squirrel Hill zip code that is Jewish.

(The following analysis by me is taken from information from the study as well as U.S. Census information.)

The clue came in the “dot density” maps included in the report, showing a representation of the geographic locations of Jewish households in the region. The following is an excerpt of the central portion of that map, with 15217+15232 shown in dark blue: 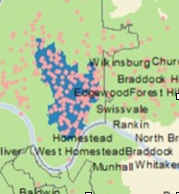 From this I made two observations. One is that although there are many households located outside of 15217+15232, a large number of those households are located in the immediate vicinity, such as Oakland, East Liberty, Point Breeze, Regent Square, and outside the city limits but proximate to Squirrel Hill including Wilkinsburg, Swissvale and Edgewood. This reinforces the notion that the “greater Squirrel Hill area” is a major focus of the region’s Jewish population.

The second observation is that, within the blue area the dots appear to be located fairly evenly throughout that area. In other words, the locations of Jewish households are “shmeared” (to use a non-technical term) relatively uniformly across the central area. In finding out that 15217 comprises 82.6% of the land area of the combined 15217 and 15232 area, I felt comfortable, because of the even distribution in assuming that 82.6% of the Jewish population in the combined area resides in the 15217 zip-code. Since the Jewish population within the two zip codes is estimated to be 14,800, then there are about 12,200 Jewish persons residing in 15217. According to the 2010 Census, there were 27,220 persons living in 15217, so it is therefore estimated that the percentage of the population of 15217 which is Jewish is 45%.

Another study finding to highlight is the age distribution of the Jewish population, which according to a newspaper article is that more than half (55 percent) of adults ages 50-64 live outside city limits, compared with 37 percent of ages 35-49 and 33 percent of ages 18-34. Since the population within Pittsburgh trends younger than outside the city, this portends a positive trend toward living in the city as long as there are housing choices and positive schooling options for those demographic groups.

As Pittsburgh’s Mayor Bill Peduto was quoted as saying: “There’s very few areas of America where you have such a strong Jewish community that is centralized in city neighborhoods. That distinct character is a part the fabric of Pittsburgh. If you’re Jewish and you’re looking for a city around the country, this study helps to show there is a very welcoming home for you here.”